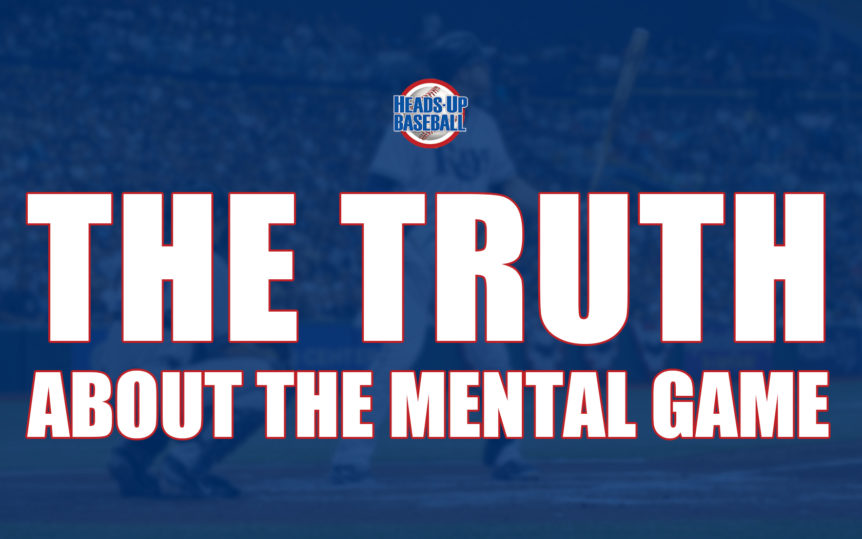 Go to your focal point.

Play one pitch at a time.

All these are solid tips for improving your players’ mental game.

If you tell a batter to 1) put his back foot in the box, 2) take a long, slow breath and look at the bat label, and 3) step in and tell himself “See ball, hit ball,” you may help him.  That’s a signature move from our bestselling book, Heads-Up Baseball, and a pre-pitch routine you saw daily if you watched the recent College World Series.

Having a simple routine like that can help a player be more confident, focused, consistent and over-come failure.  When the pitcher steps on the rubber, it’s usually helpful to have a simple game plan you execute.

But if that’s all you teach your players about the mental game, you’re leaving a lot of good performance and life-enhancing learning on the table.

It’s Not That Simple.

The mental game is complex.  It’s messy.  It can’t be taught or learned over night. Almost no one “masters” it. Even the best of the best players struggle with it. Just when you think you’ve got it figured out, the game will kick your butt. You can go from feeling unstoppably confident to feeling totally lost in a day – or even one pitch.

We’ve been in major league clubhouses where top all-stars tell us, “I stink. I can’t hit.  I have no idea what I’m doing up there.”  World champion pitchers dominate one day (or one week, or one season)… and then a moment later may doubt every pitch they throw.

One long-time, highly successful major leaguer you’d know if we said his name says, “I’d say the most common thought I had during my career was, ‘I’ll never get another hit.’”  Confidence is fragile!

A current major league all-star shortstop has worked with Ken and Heads-Up Baseball for almost 10 years… but still has a hard time staying confident.  “I know all the right stuff to think and do,” he says, “why is it so hard to actually do it???”

Why is the Mental Game so Hard?

Why can’t it be kept super simple?

While it can seem like every day is the same… Get to the park, take BP, In and Out, sit around for a while, then line up and play… actually no two days are ever the same.

Less obviously (at least to fans), the mindset and emotions of players also change constantly.  You may feel energized and bouncy one day, sluggish the next. Confident and locked in one day, lost and afraid the next.

Players’ confidence can also change AB to AB, and pitch to pitch.  Make an error (or a great play), get a hit (or strike out), or just get a sour look from his head coach and confidence and “vibe” can head south for even elite players.

Some days – some moments, really – you have your “A game,” where your performance flows naturally and you’re able to keep things simple.  Other times you have your “B game,” (you’ve got average-for-you stuff), and still others your “C game,” where everything feels like a struggle.

World Series champion Jon Lester says: “I’d say over a 30-start season I have my A Game five times. So 25 times out of 30 I’m compensating and adjusting to compete.”

In a recent article on ESPN’s website, Aaron Judge says that when he starts beating himself up mentally during an at-bat he steps out of the box, picks up some dirt, squeezes it, and as he throws it away he imagines he’s throwing away his negative thoughts.

That’s a great tool, and it makes for a nice story, but he also said for years he read Heads-Up Baseball “again and again” to help develop his mental game. But you can’t just read a book about it and think you have it (even if it is a REALLY good book).  You have to go through the ups and downs, the trials and errors, to create your own best way to play the game.

One Size Does Not Fit All

So in addition to individual differences between players… there are big variations in the mental game within a single player!

Each player needs to figure out his own mental approach and develop his own skills.  Despite a combined roughly 70 years of helping coaches and players with the mental game, we can’t tell a player what he should do. A strategy that helps one player may mess up another.  Going to the mound to “dominate” may be the best approach for one pitcher, but a terrible idea for another.

It’s a Ride You Ride

The mental game isn’t something you master and “have down.” It’s a ride you ride. A path you walk. A journey you take. A career-long adventure filled with ups and downs. Top players accept they are always “in school,” learning how to get a little better at dealing with the reality of competing in baseball.

A player with a “good mental game” is good at riding the ride.  He enjoys it when he feels confident, and he compensates and adjusts when he’s riddled with doubt and fear.  Each pitch is a new situation and he has to find a way to get his talent to show up for it.

Cubs manager Joe Maddon told us a key element to a successful player is “creativity.” (When do you hear a coach talk about that?)  He wants players who can not only be creative about how to get from first base to third, but how to be creative enough to play effectively when they feel terrible.  “I may not have any of my pitches working,” the creative player says, “but I’m going to find some way to get the job done and beat you anyway!”

The player with an under-developed mental game rolls over and lets a lack of confidence or success cripple his performance.

Here are a few ideas to help you deal with the realities of the mental game:

We can help you with this… see below.

Ultimately, the combination of the complexity of baseball and the infinite variability in the humans playing it mean that the pitch that is about to be thrown has never been thrown before and it will never be thrown again. You and your players have to continually get better at dealing with that.

We called this article, The Truth about the Mental Game.  The truth is… we don’t know the truth!  We have a lot of experience and have helped a lot of players and coaches, but we’re constantly learning and developing ourselves.

Our mission is to help coaches and players get better at riding the ride, taking the journey, and finding out how good they can get at competing in baseball.

We’d like a chance to help you more effectively coach and teach the mental game.

So we’ve created a brand new, free online workshop: Heads-Up Baseball – How to Be a Great Competitor.   It’s a four-part series where we share with you some of the best new mental game ideas and techniques we’ve discovered over the past 25 years since the original Heads-Up Baseball was released. 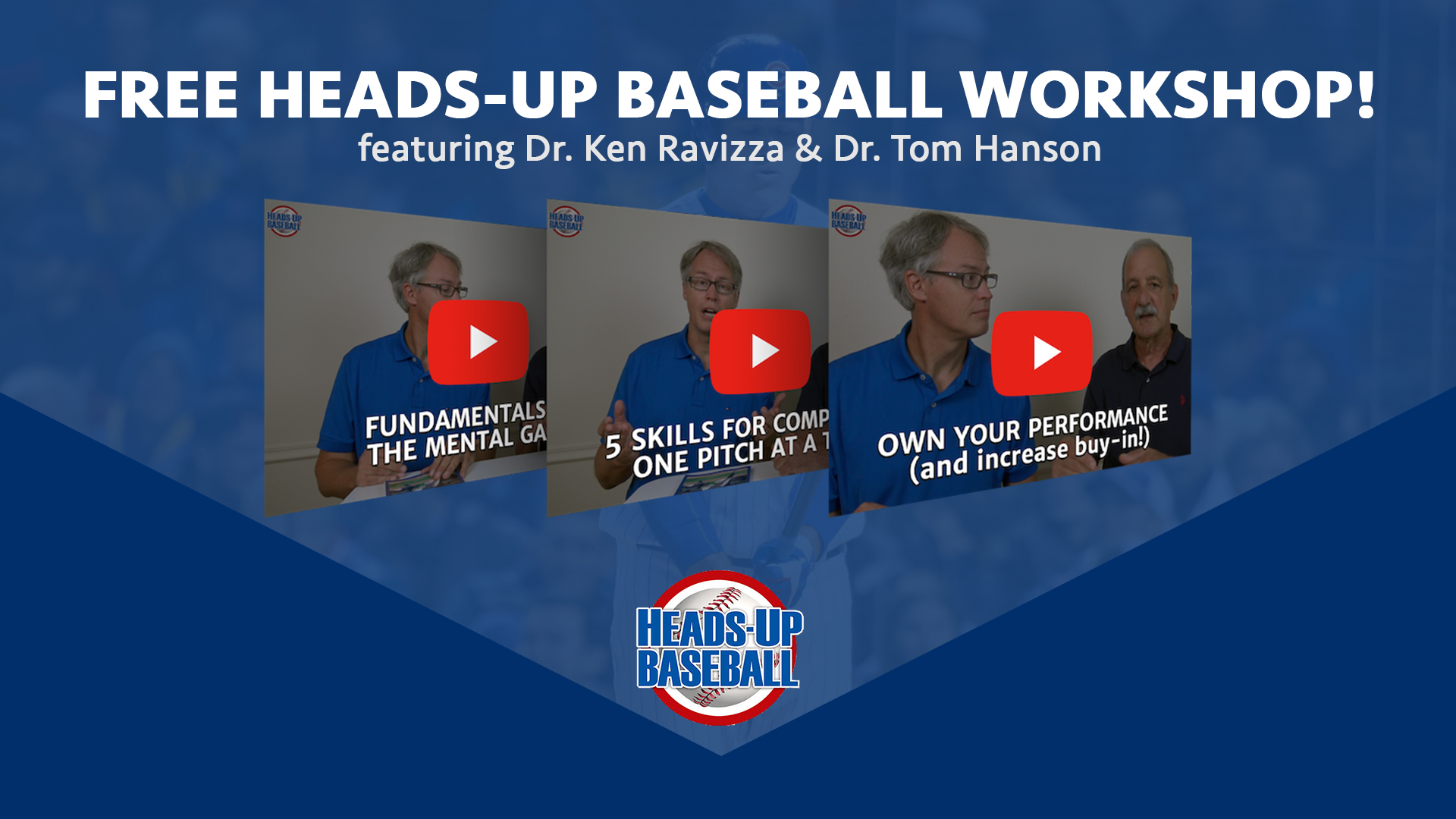